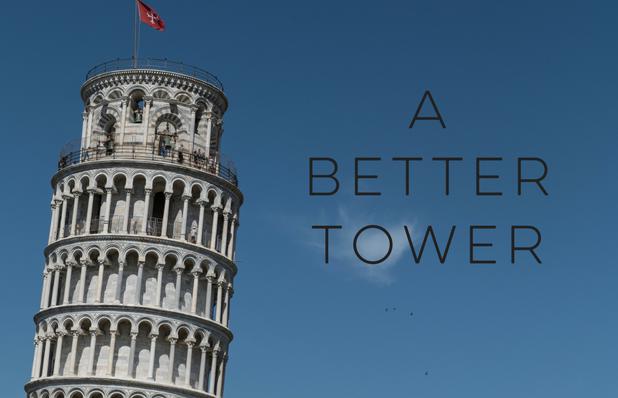 I can remember reading the story of The Tower of Babel in the Children’s Bible that I had as a little boy. The story kind of freaked me out because of the accompanying pictures in that Bible. The illustrated Tower looked like a combination of a giant, multi-tiered cake and the Leaning Tower of Pisa. And there were little people – tons of them – going up and down its circular stairway leading up to the clouds. All of that seemed pretty dangerous to me, especially since I was afraid of heights! So, I took comfort in the fact that God didn’t like that Tower either: Clearly, God didn’t want us going upward…at least not too high!

I guess my five-year-old theological conclusions weren’t entirely wrong, even if they were rooted in a fear of heights (not necessarily of God). It’s true! God doesn’t want us going upward; at least not in the sense of trying to “be like God” or creating a god/religious system in our own image. Rather than going upward, God has called us to go outward. Upward tends towards self-glory and self-preservation. Outward tends towards an others-orientedness, a living and giving of the self for the well-being of the world around us. I certainly didn’t think of it that way as a child, but I’m learning to as an adult.

Of course, learning and doing are a few degrees apart from one another. Pastor Justin’s questions during the sermon were certainly helpful in identifying the knowledge-to-practice gaps that exist in my life. For instance, Justin asked, “What do your towers look like?” Here’s how that question translated out to me: In what ways am I fortressing myself? In what ways am I isolating myself? In what ways am I living to elevate myself and those I want to have near me as a means of avoiding the rest of the world around me? In what ways am I stockpiling to build my own little kingdom rather than aiming to be fruitful in order to spread the abundance abroad? In answering those questions I’m starting to see that, as much as I dislike heights, I think I may have my own skyscraper under construction.

However, in Genesis 11:5 is says, “And the Lord came down to see the city and the tower, which the children of man had built.” That’s certainly an ironic statement: Humanity was building a tower to heaven, and yet God had to come down to even see it! But it’s more than a word of irony – it’s a gospel word – a word of good news! The good news, in this case, is that God didn’t leave human kind to self-destruct in its idolatry. God sovereignly acted against the rebellious will of man, and for the good of rebel man, at the same time; confusing their language and causing them to scatter.

God has graciously done that in my life many times. Just when I think I’m well on my way to building another level to my tower, He brings it down. It’s confusing at the time. It hurts. It scatters me. But in moving out I’m forced to have to look to Him for guidance, to trust Him for provision. I start to see God, and I start to see the rest of the world again. God reveals Himself as God to me by bringing my tower building to a screeching halt. You see, it’s not that God is against towers. He’s building a huge one for us to enjoy – it’s called “The New Jerusalem!” It’s that He loves us enough to come down to us and deliver us from ourselves so that we can have life as it’s meant to be: Abundant, eternal, borderless, unified, and awe-inspired by His glory.

Renewal: Repairing the Hole for Wholeness

Searching for Follow-Through in my Resets

Obadiah: a Lesson in Brotherly Love